The immediate area surrounding and including the Nickol River Project tenements has been explored for gold since 1889. Most recently the tenement M47/1527 which is partly surrounded by tenements M47/127 and M47/401, has been drilled by a series of owners and successfully mined for alluvial gold by its present owners, Artemis Resources Limited (ASX: ARV).

This area is highly prospective for gold deposits, although no substantial modern exploration or drilling has been carried out on the Nickol River Project tenements. 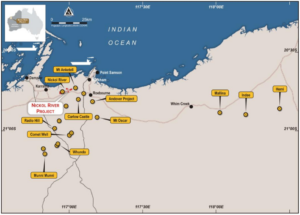 Mining International Pty Ltd (Mining International), is a wholly owned subsidiary of Cyclone Metals. The Company holds tenure to 4 mining leases at the Wee MacGregor Project located 40 km southeast of Mt Isa in Queensland (Wee MacGregor Project). The tenements are located within in the Eastern Fold Belt of the Mt Isa inlier. The tenements are located in the Mary Kathleen Zone/Wonga Subprovince. This area is prospective for a variety of deposit types, most notably structurally controlled epigenetic copper and gold deposits.

The Lady Ethleen tenement (ML 2771) has been 100% retained by Cyclone Metals (Lady Ethleen). The Lady Ethleen tenement is currently being utilized for a trial mining and processing exercise using a newly developed green leach process known as GlyLeach TM. A successful trial will mean a significant shift in future processing technology and will in turn facilitate possible development of the part owned, nearby Wee Macgregor Project as well as many other potential small assets in the district, that may be economic with access to appropriate processing technology. Marampa is an iron ore project at the development stage, located 90 km northeast of Freetown, Sierra Leone, West Africa (Marampa or Marampa Project). Marampa comprises one mining licence (ML05/2014) comprising 79.40km2 and one exploration licence EL46A/2011 – 159.78 km2. The were previously granted to Marampa Iron Ore (SL) Limited, which is indirectly a wholly owned subsidiary of Cyclone Metals. The Marampa Project remains under care and maintenance while the Company engaged in dialogue with the relevant Sierra Leonean authorities in an attempt to have the Mining Licence reinstated or reissued by mutual agreement.

The Project is located 120 km northeast of Freetown in the northwest of Sierra Leone and consists of one exploration licence (EL22/2012) covering 68 square km. The licence is located 70km due north of the Marampa Project and the Pepel Infrastructure and comprises rocks known to host specular hematite mineralisation.

The Kukuna Project remains under care and maintenance.